Style guides, once the exclusive domain of print designers, are finding their way onto the web. Built out of HTML and CSS, such style guides are handy tools for the design process, for maintaining sites over time, and for making collaboration across teams much easier. Anna Debenham joins Jen Simmons to explain. 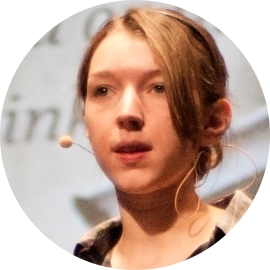 Anna Debenham is a freelance front-end developer living in Brighton in the UK. She was awarded the Netmag Young Developer of the Year Award in 2013. She's the technical editor for A List Apart, the co-producer of 24 Ways, and the author of Front-end Style Guides. When she’s not playing on them, she’s testing as many game console browsers as she can get her hands on.

It's not just something that you hand off to the client and that's it. The intention is that anyone who works on the site, if new features are built, if new components are built, then they go into the style guide.

This is The Web Ahead, a weekly conversation about changing technologies and the future of the web. I'm your host Jen Simmons and this is episode number 72. I want to first say thank you so much to today's sponsors, we have three of them today: Media Temple, Squarespace and the Velocity Conference.

So today on the show I have here Anna Debenham. Hi, Anna.

Speaking of performance and optimization... [Both laugh] It's easy, especially on a big project, for the code to get completely out of control. I know a lot of people are using object-oriented CSS, like Nicole Sullivan suggests. Or there's some other, kind of branded, like, "Oh, it's called SMACSS, it's called this, it's called that." These techniques around, let's not just write custom code, directed custom CSS, directed at each and every little thing on the page. Because that just gets to be more and more verbose, messier and messier. Let's figure out a way to organize, especially if you can figure it out from the very beginning, how to organize our CSS and reuse the same styles over and over and over again. We'll get a more consistent result and we'll have... when something new needs to get built, we'll have a quick way to use CSS that's already half written.

Media Temple. For years Media Temple's grid service has been the hosting choice of more designers, developers and creative professionals than any other platform. That's because a single grid account can host anything from your portfolio site to a hundred different client projects. And the grid is ready for anything. Hundreds of servers work together in the cloud to keep your sites online even if you suddenly hit the front page of Reddit. It's all managed through their simple, custom control panels and backed by Media Temple's famous 24/7 live support. VPS solutions are also available with their DV and DV Developer hosting plans. Don't forget to check out their new managed WordPress hosting as well as their other managed hosting products. If you want to learn more, head over to mediatemple.net. And they're doing something really special for The Web Ahead listeners. You can enter the promo code TWA when you sign up and you'll get 25% off your first month of hosting. Thanks to them. As I've said before, I've had a grid account for.. it's at least 8 years, 10 years, 112 years? [Laughs] They're just rock solid. I just forget it's even there because I just open up whatever, Git or command line and SSH in and pull my repo. Or sometimes it's FTP and just drop my files over there. And I don't have to mess with the rest of it.

Yes, But let's talk instead about Squarespace for just a moment.

If you don't want to have to wrangle your own website, like Drupal. [Both laugh] You can use Squarespace, which is an all-in-one platform that makes it fast and easy to create your own professional website, portfolio and online store. This is one thing that I just... every time, this gets me. "Oh yeah, clickity-click-click-click." Plans start at $8 a month. Look, now you have a store. And it looks awesome. It doesn't look like a backend developer built it. It looks like a designer built it. It's just amazing to me that it's that easy to build a store at this price point. Like, this was not true several years ago. But you can check them out yourself. The trials are free. Free trial. It's really free, like you don't have to give them a credit card which they'll start charging later without telling you when you forget. It's just a free trial. You give them your name, your email, your password, and you're done. And you get to check it out for, I think it's like 2 weeks, I don't know, I have to look that up. But 10 a week, something, free trials. And then you can get 10% by using the coupon code JENSENTME for your whole order. Whatever it is that you get at that moment.